Many of you parents out there will be struggling with children 24 hours a day, 7 days a week, ? months of the year;

and just as many grandparents missing seeing the grandchildren.

Look at it from the kids point of view…….

Said Mum to Mabel Fall off your seat

‘Keep your elbows If you want more,

Off the table You will say “Please”

Do not eat peas Don’t fiddle with

Off a fork. That piece of cheese!’

Your mouth is full- If then we kids

Don’t try and talk. Cause such a fuss,

Keep your mouth shut Why do you go on

When you eat. Having us? 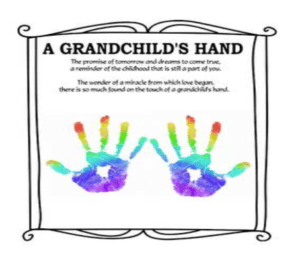 Perhaps we should teach and guide our children with these thoughts in mind:-

We have a lot to learn from children who say what they think and who have faith and trust which we as adults often lose. They have a simple but profound outlook on life which we make complicated.

And he took them up in his arms, laid his hands on them and blessed them.

Life at the moment

Based at Harden Congregational Church

Are you struggling to get fresh fruit and vegetables? The Harden Hub, based at Harden Congregational Church, can help!!

We are delivering fruit and vegetables in a mixed bag to your doorstep if you need it.

c) an individual, couple or family who have suffered a loss of income due to the virus outbreak

There is no charge for the food or the delivery.

Up and running again!

The Hub was unable to deliver the bags of fresh fruit and veg on Friday April 24th following a sudden bereavement suffered by one of the volunteers. Fortunately, this past week we have accessed a separate supplier who delivered produce to the Church on Friday 1st May. The team swung into action to make sure bags were delivered to households in the village.

We managed to access some funds from the Council to pay for it.

Whilst we were taking delivery, a gentleman from the village appeared at the door and gave a very generous donation to the Hub. This means that we have sufficient funds to keep us going for a while yet.

A big thank you to him.

We received an email from Harden Pharmacy as follows

‘We understand you are providing assistance and support to the community in the village with shopping, food and supplies etc. We were wondering if there was anything we could do to help your team or if there is any way we could work with yourselves or assist your team. We have supplies of protective equipment and essentials that we could provide you should you require them or if they would be useful.’

Following that offer, I went to the Pharmacy on Friday morning and was given a box of produce for the Hub along with supplies of protective masks, gloves and hand sanitiser for the use of our volunteers, all at no charge! One of the staff even carried it across to the church for me. The volunteers used the protective equipment and the produce was shared between our recipients.

THANK YOU ALL AT HARDEN PHARMACY !

Thank you to the volunteers, both adults and children from Harden Congregational Church, St. Saviour’s Church and members of Harden and Wilsden communities.

I’ve just finished watching the classic 1985 World Snooker Championship final. Nothing has changed; Dennis Taylor won it again! And so it is for this update; nothing has changed this week in the world of government and local authority recommendations regarding funerals and the virus.

If anything changes before next weeks’ Tittle Tattle the updated information will be posted on our website at www.villageundertakers.co.uk where you can also find details of our services and prices. Despite the current crisis we remain open 24 hours a day 7 days a week. Ring Robert Waddington on 07599 46 26 49

For all your garden maintenance

Old ones can be refilled

Here are some jokes to make you smile provided by Amelia and Oliver, pupils at Harden Primary school; at home at the moment.

Answer To get to the shell station!

If you would like to advertise, pass on useful information or contribute brief articles of general interest, please email

A  Blessing for the Children

May God bless and watch over you

May God’s face shine on you

And be gracious to you

May God show you His way

And grant you peace.

Percy was gazing out of the window of the Art Room. It was not like him to let his attention wander in class. It would be fair to say that he had a limited interest in and a questionable talent for, all things ‘arty’. No one can be good at everything and Percy was no exception. However, he enjoyed Ms. Paynter’s classes even though he was never going to be a Monet or a Picasso. He didn’t feel under any pressure of his own or anyone else’s to perform. He enjoyed the colourful surroundings of walls littered with the handiwork of more artistic pupils and the laid-back approach to teaching of the glorious Ms. Paynter.

Percy had had something of a crush on the art teacher from the very beginning of their acquaintance, in September. She was young, pretty, and bohemian in her dress and her outlook on life. She was so different to any of the predictable adults Percy knew and so unlike her teaching colleagues in her approach to learning. She didn’t mind her class indulging in a little light-hearted conversation and laughter as they slapped paint on unlikely masterpieces. She promoted the idea of enjoyment of creative activity even if results often fell short of the enthusiastic artists’ aspirations. She didn’t seem to mind if the finished product of Percy’s attempts at drawing a bowl of fruit more closely resembled a compost heap. Her class was an oasis of peace and conviviality in amongst the constant demands of the academic curriculum. Percy loved it and usually gave Ms. Paynter’s requests and suggestions his full attention.

But today his mind was diverted, not for the first time, by the exploits of Kayne.  It was not because Kayne was posing a threatening presence in class. One of the beauties of the art class was that Kayne paid Percy no attention at all. Art was Kayne’s forte and under the expert handling of Ms. Paynter, his talent flourished. His usually distracted process of thought was diverted, whole-heartedly, to any task in hand set by the talented teacher and for once he contributed to the joint creative experience.

In fact, today, Kayne was conspicuous by his absence. He had failed to turn up to Registration. He had been missing in History and thankfully, as far as Percy was concerned, had missed the opportunity to hear Mr. Old wax lyrical about how the warring factions in the Wars of the Roses had indulged in horrible torture. He had not turned up for football practice at lunchtime and for once, Percy had been able to eat the whole of his packed lunch in peace.

Percy had a very good idea why he had not had the pleasure of Kayne’s company that morning. As he looked out from the art room windows over the sports fields below, a smile spread across his face as he recalled the events of the previous day; the wonderful experience that had been the football trip!

Percy had been walking slowly towards the school gates. He had noticed the coach waiting and the eager young footballers in an excited queue beside it. Sports bags were being loaded into the cavernous boot by helpful parents under the watchful eye of the coach driver. “Bags to the right, equipment to the left please.” Percy grasped his own sports bag tighter. Training today wasn’t going to be much fun with the also rans of the football team, of which he was now one; the losers who had missed out on the experience of a lifetime. Percy had hoped to miss the departure of the trippers. The smiling, excited faces of his team members was only going to rub salt into an already gaping wound. He was missing out on the most exciting event of the school year; a chance to meet his footballing heroes and to train in their hallowed ground. He put his head down and determined to slip through the gates without being noticed. He heard the coach engine start up. He felt sick with envy.

He manoeuvred his way through the crowd of waiting parents and turned up the school driveway. Suddenly, he heard the voice of Mr. Vault.

Percy stopped in his tracks and turned to see Mr. Vault gesturing at him, frantically, calling him over. Perhaps Mr. Vault had forgotten he was not going on the trip. This was prolonging the agony

“Percy, come on lad get on the coach.”

“Yes, you are. We are one down. Kayne Wayne hasn’t turned up. We need somebody to make up the numbers. Come on, no time to lose, hop on.”

Mr. Vault grabbed Percy and pushed him, together with his bag, through the coach’s closing doors. Percy felt himself propelled towards an empty seat next to Ken.

“Wow that’s great Perce. You’re coming after all. Kayne’s done you a favour for once.”

The bus lurched forwards. Percy was reminded to fasten his seat belt as he fell into place when the driver picked up speed.

The route to the football club took them along Wellington Road and following a sharp right-hand turn, past the back gate of the school. Suddenly, one of the boys sitting on the front seat shouted out with something approaching glee

“Look, there’s Kayne standing at the gate with his bag. Ha, ha, ha. He’s gone to the wrong gate!”

The lack of sympathy displayed by the occupants of the coach for Kayne’s plight was immediately apparent. Seat belts snapped open and boys jumped up from their seats to experience the sight of a very disgruntled Kayne standing open-mouthed as the bus hurtled past him accompanied by the sound of many cheering voices emanating from the open windows.

Percy, in more reflective mood later, wondered why Mr. Vault had not requested the coach driver to stop to pick up Kayne. For some reason, the usually keen-eyed teacher was looking out of the window on the opposite side to the scene capturing everyone else’s attention, absorbed it would seem by the sight of an elderly lady walking an equally elderly dog. By the time he appeared to notice the hullabaloo created by his young charges, the bus had travelled through the traffic lights and was about to negotiate the very busy roundabout, several hundred yards down the road. One bright young spark informed him of the reason for their excitement. With the hint of a smile his only comment was “

“Tough. He should read his emails more carefully.”